Four months ago, Man Piece and I took possession of our very own house. It’s a classic California bungalow and I absolutely adore it.

As we had moved back from Australia, we had no furniture so had to buy all new stuff to fill, what felt like at the time, the monstrous house.

ICYMI: We bought a house and now we have to fill it

But in the four months that we have been here it has started to feel like home (and a lot smaller than we originally thought, but still massive). Especially when you can bash holes in the walls and rip out that tree you don’t like. All a part of making it our own.

The part I was particularly keen on was filling it with furniture. Finally, all those hours spent on Pinterest and watching The Block were about to pay off.

So in the first of a series of posts to show you our new abode, I have taken a few photos to show you how we have filled our lounge. I’m still not completely happy with it, but in time it will get there.

I first saw these chairs on House Rules (yellow ones were used in Candy and Ryan’s lounge) and I liked the style then, but when we were perusing Freedom one day I saw they came in teal and I knew I had to have them. They’re pretty comfortable to sit on and compliment the couch nicely. However, this end of the lounge feels a bit tight (I’m standing in the door to take the photo) with both of them there, so one of them may be shifted to another room. I’m just not completely sure yet.

The couch is also from Freedom and ridiculously comfortable. Once you sit down you don’t want to get up. It’s a good couch for snuggling into, especially in the corner with the chaise. I’ve spent a few hours there just reading and looking out the window. 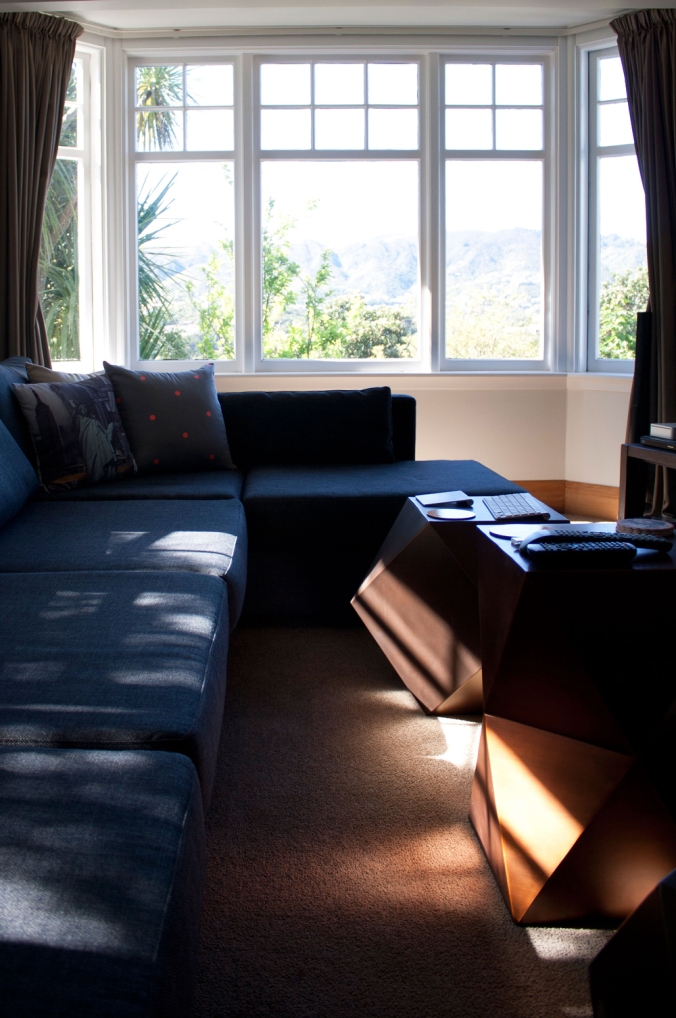 The copper coffee tables are from Freedom (seriously, this is the lounge that Freedom furnished – stylish and affordable). We originally just had the tall one in the middle and it was supposed to be a side table with the teal chairs, but Man Piece liked it so much that he suggested we get another two and have three in place of a big coffee table. Although I love them, I’m still not sold on the idea of having three side tables acting as our coffee table. So far in using them like this I don’t find them very practical as you can only fit so much on one table and then the other one is too far away, type of thing. At least they look good.

This is the part of the room I hate the most. That fireplace is an eyesore and I don’t think it is even safe to use. It really just doesn’t go with the rest of the house. As you can see, we haven’t been using it because the heater is still sitting in front of it (that, and, well, it’s summer). Wooden coffee table which we are using as an entertainment unit is from Freedom. I really wanted to use it as an actual coffee table and it may end up that way at some point in the future, but we couldn’t find something to act as a decent entertainment unit, so it ended up there instead. Eventually the fire place may be demolished and the TV will be wall-mounted. For now this set-up works for us and we don’t want to go changing things before we’ve had time to really get to know the place. Plus the photo frames are a hodge podge collection of mine over the years, perhaps these need to be streamlined.

This window behind the couch looks out on our back yard where we have a lovely old gnarly Ngaio tree growing.

I love that the couch’s cushions are all loose and can be moved around or flipped without the couch’s appearance changing much. All of the covers come off as well, so if any spills do happen, I can whip it off to get it dry cleaned. 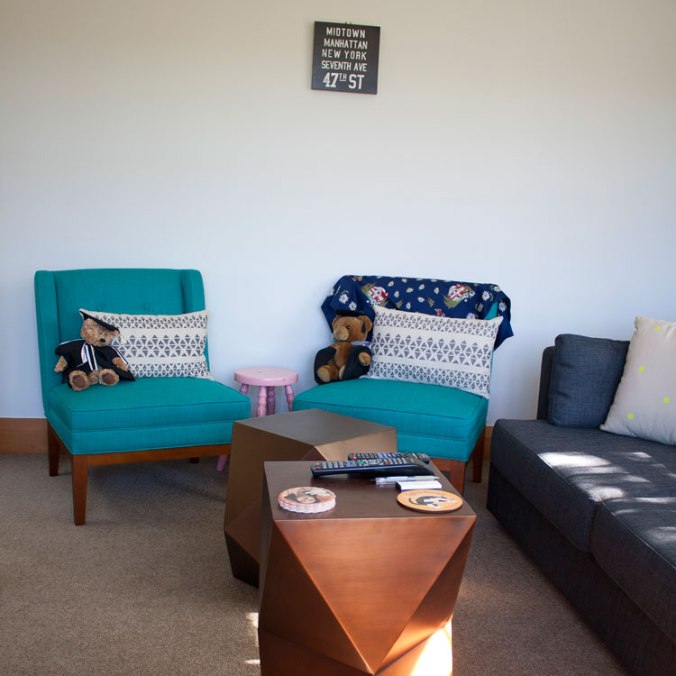 Yes, the New York canvas is crooked, it is likely to stay that way until I deal with actually putting things on our walls. I have all of these lovely black and white photos from a New York calendar I am going to get frames for and then hang around the canvas to make a gorgeous black and white New York print wall.

I think I need to nix the graduation bears. Although I love them and won’t get rid of them, their place is not on these chairs. I think a bookcase or something in the corner would be a good place for them to sit along with the photo frames from the fire place. But it is finding a bookcase that works which is the real problem.

The rectangle cushions on the teal chairs I came across in Freedom. You can’t see it from this photo but there is metallic stitching all over them, which really draws in the metallics of the side tables. That pink stool has also had a make-over, but that is for another post. Polka dot cushions also from Freedom, New York cushion from Briscoes.

Finally, the view out to Mt Kau Kau is one of the best parts about this lounge.

6 thoughts on “Peek inside my house: The lounge”