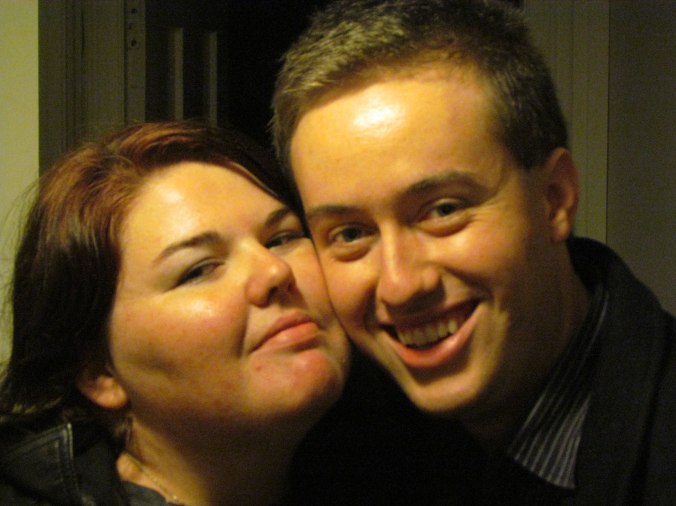 Jethro and I on our first Valentine’s Day.

I was sitting on the couch at Jethro’s flat in Wellington, watching something on TV. It was a Saturday night. I think we’d just finished dinner. We were still in the phase of getting to know each other – we’d been ‘official’ for just under a month.

My phone rang. It was mum. I picked it up. She immediately asked if Jethro was there with me. Yes, I said. Why? I could hear something in her voice. I asked what’s wrong?

Those two little words shifted my world on its axis. I couldn’t keep myself composed and here I was sitting next to a guy I barely knew bawling my eyes out.

I barely recall what happened the rest of that night, or the following few days. I remember driving back to Hawke’s Bay on the Monday – a stop over in Palmerston North for an interview at the Manawatu Standard, which I barely remember, I didn’t get the job, no surprises there. I don’t remember what happened on the Monday night, or Tuesday morning.

What I do remember is leaning on the breakfast bar in my parent’s house talking to mum, getting ready to go out to do a few things around town in preparation for Granddad’s funeral and family arriving. It was just before 1pm and I was scrolling through Twitter.

I started to see tweets from people I followed in Wellington. “Oooh, that was a bit of a wobble.”

I said to Mum – Wellington just had an earthquake. She replied nonchalantly with something like, “Really? How big?” Something we now followed.

Then I saw a tweet, with a picture, from someone I knew lived in Christchurch. It was a brick chimney on top of a car.

I stopped. I could barely breathe, let alone say something. My world shifted on its axis for the second time in a few days.

“Christchurch,” I choked out.

I don’t remember much else from that day except the feeling of panic and grief and anguish of seeing Christchurch fall, of having to wait several hours to hear from my sister, my best friend and other people I cared about.

I sat glued to the TV for the rest of the day, unable to function. Needless to say, we never did leave the house.

That week in February 2011 was one of the worst weeks of my family’s life. Granddad died, Mum had eye surgery, my sister got stuck in Christchurch and I was already barely functioning due to ongoing depression. Every time I think of it, I choke up, struggle to stay composed.

I’ve been thinking about the events of that week a lot lately with the fifth anniversary of both my Grandfather’s death and the February 22 earthquake (and five years of being with Jethro).

And I can’t help but think there were higher powers involved.

I met Jethro at the start of January, six weeks later he was my rock. He came up to Hawke’s Bay to be beside me throughout my grief for my Grandfather. He met my entire family after only dating for four weeks – and I mean entire family: aunts, uncles, cousins – a trial by fire, as my mother called it. I had someone to lean on when I hit rock bottom. And boy, did I hit rock bottom that week – my black dog took over.

If Granddad had not died three days before the February 22 quake, my sister wouldn’t have been at the airport – one of the safest buildings to be in at the time. She would have likely being in the lab at university, surrounded by a lot of glass. 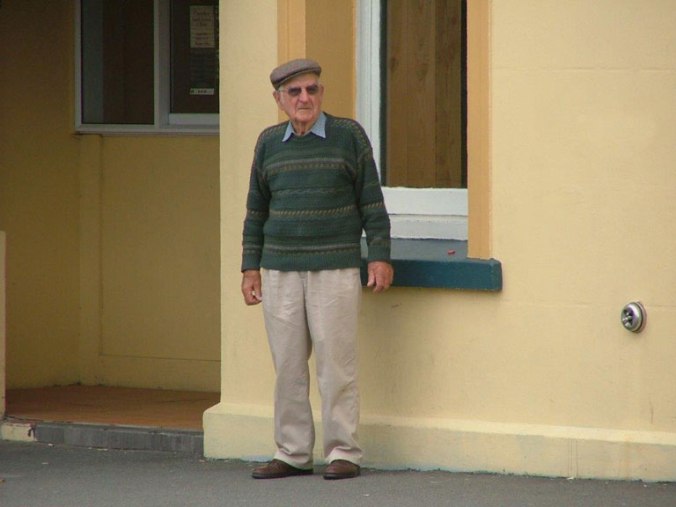 Granddad outside Cokers in 2006.

Granddad loved Christchurch. He was stationed there during World War 2 and I don’t know how he would have reacted to seeing Christchurch broken. In a way it is a blessing he never saw the devastation. 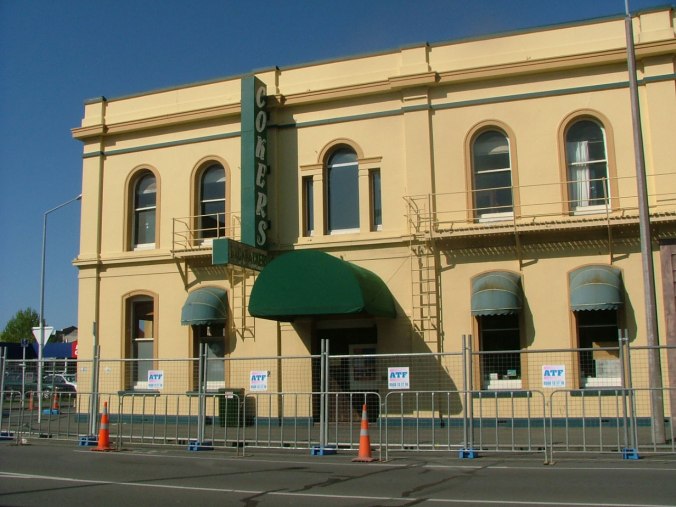 He would tell us stories about Cokers Hotel on Manchester St, where he used to go to drink. He visited the old hotel and pub when he came down for my sister’s 21st. Cokers is no longer there. It was red stickered after the September quake.

I’ve struggled to write this post – choking up a little. After five years, you would think it would be easier. I guess it has gotten easier – I no longer burst into tears when thinking about Granddad or Christchurch. But five years later, I’m still grieving my grandfather and the city that was my first home-away-from-home. It has been hard to grieve a city when I haven’t been there to see what it has become. I still think of it as it was, not how it is. 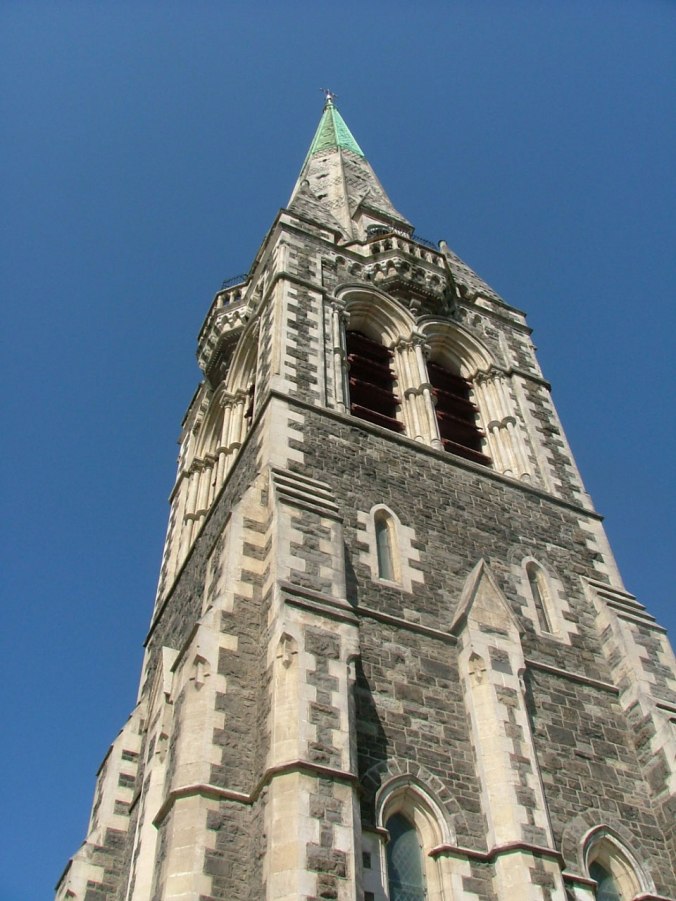 And then I start to think – if this is how I feel when I wasn’t present for any of the major quakes in Christchurch, how do those that experienced them feel? I can only imagine, and feel for all of you.

I don’t really know what this post was supposed to become. I felt I needed to say something because of the anniversaries, because of still feeling grief, because of battling depression again and how it can make you think of things even though they are long past. And how depression has a way of taking you back to those exact moments when your life changed forever and remembering exactly how you felt at the time. And because I wanted to say that, even though I never experienced the quakes in Christchurch, I stand with you in solidarity.

And just to make sure there was a little rush of adrenaline today, Seddon has produced a 5.0 as I write this. Good oh.

The events of February 2011 will always be linked for me and I don’t think I will ever be able to not feel choked up when thinking back on the first time I saw what happened in Christchurch. Kia kaha.

One thought on “Five years”

I never know what to write as a caption, tbqh. I feel there’s more pressure to come up with something profound cause it’s on the grid. Whereas stories are a snapshot in time and I just say what comes to mind about my mundane life. I wanted it to be positive - look at my great hair, loving my new colour! But fuck, it’s so hard to be positive right now when I’m struggling. All I can see are the dark circles under my eyes and my double chin. I’ve adjusted to my new schedule of working from home, at the cost of my fitness and a bit of extra weight (whatever, it’ll sort itself out). Most of the time I just feel blergh which isn’t the best motivation for getting out when you don’t have a reason to leave the house. Anyway... where was I going with this? I have no idea. I feel stuck in limbo which is a bit shit.
Excuse me, but you’re getting in the way of Face ID. Since lockdown this cat has become very cuddly. Nimbus has usually been independent - she’d come and go as she pleased and would usually sleep in the spare room or office. But now, she’s a couch cat and will come and give me cuddles every night, eventually curling up on the blanket at my feet. Not really sure what prompted the change, but I’m here for it.
Achievement unlocked! First time making hot cross buns and I actually nailed it. They are so good. Used the @lewisroadcreamery recipe and added cranberries and white chocolate. Quite chuffed with myself as my track record with yeast is pretty hit and miss. • Also how good is this t-shirt for lockdown.
Day whatever... • Had to do formal dress up for team meeting today. So I put on a dress, ma pearls, and did my hair and make-up. Kind of felt better for it, even though I got back into leggings and a hoody soon after. Dress and sneakers are @torrid. • I don’t know what this pose is, but it looks cool?! It’s nice, it’s different, it’s unusual. • Had a bit of an emotional wobble last night. Now I just want all the comfort food and to do nothing. Doing nothing can be achieved, cause we can’t go out, but comfort food... I’m gonna have to improvise. How is everyone else fairing in lockdown?
I wished I wasn’t fat today. • I haven’t thought that in a long time. I’ve come to accept me for me over the years. And I try not to let it stop me from doing something I want to do. But today... today I tried something new and I didn’t enjoy it because I felt too fat to physically be able to do it. ⏺ ‘Why can’t my body do these movements and positions?’ ↪️ Because I have a gigantic stomach in the way. ↪️ Because it’s the first time doing this. I didn’t want to continue, but I did. I pushed through. I finished. • Today I did my first body balance session. (Les Mills has put up a few on TVNZ On Demand.) I adjusted many positions to suit me to the point I wasn’t really doing them. I paused often because I was out of breath or my muscles ached from holding poses too long. It was frustrating. Which is why I wished I wasn’t fat today. • We all have good days and bad days with our bodies. Today I just happened to have a bad one. It may not be for me, but I moved, I tried, and I’m knackered.
Day... I’ve lost track already. The rain stopped and the sun came out briefly. It almost felt like the entire neighbourhood got out for a walk at the same time. There were so many people out waking, with their kids and dogs. Several people out for a ride, like us. The best bit about it was there were barely any cars. It meant we could ride down the middle of the road, or next to each other. People were even walking and running in the middle of the road to keep distance. It felt amazing and it was peaceful and calm. • We did a loop to Northland, down through Karori tunnel, past the Botanical gardens and back up our hill to home. Total 30 mins, 9.5km. The bit of road from Karori to the gardens is usually gridlocked, so we don’t go that way normally. And it was so much fun to have reign of the road.
Day 3 of iso, day 1 of nationwide lockdown. Brain’s being a dick, but at least I have this crazy meow.
Day 1: Isolation started today for me. Have got my desk set up and Firebolt has already approved. Little shit also stole my seat three times today, so that was fun. I’ll be trying to post upbeat posts on my stories for the next month. Funny stuff/cat photos etc. Follow along! We’re all in this together.
A year ago, I was so excited to see giant pandas at DC zoo. Today I went to the dentist and got my first ever filling. Life is all about those swings and roundabouts. That’s my post, that’s all I got today. But swipe for panda! 🐼