And I really mean, I finally had someone to celebrate with. Not one of those awkward ones where you do something for the guy you like and they just end up laughing at you (yeah, true story).

Man piece wouldn’t tell me where we were going or what we were doing, which concerned me a little. There were rumours floating around twitter that he was taking me to a Data Centre.

Sure, that’s HIS idea of a hot date. Frankly, it’s not mine and would have resulted in a swift kick to nether regions.

Lucky for him, it wasn’t a Data Centre. He took me to the Observatory up the tram.

But I’m more going to use this post as a sort of reflection of the last few years, because for me, there has been quite a turn around of events.

This is the time where I should put in a warning that if you’re sensitive about anything or tend to burst in to tears for no particular reason you should probably stop reading or not read this when someone else is in the room. Oh and possibly have tissues ready or something like that.

Three years ago, I had a fairly epic break down. It just happened to be on the 14th. Nothing particularly to do with that day, just happened like that.

I had been diagnosed with depression about six months earlier and hadn’t really done anything about it. I’d just kept going on as per usual. But this particular day, I was stressed to the max because summer school was finishing and I was trying to organise the next semester and working too.

It was a fight with one of my best friends (and flatmates at the time) that was the catalyst to my break-down. Absolutely nothing to do with her, it was just wrong place, wrong time. I love her to bits.

Anyway, I ended up trashing my room. Literally trashing it. Throwing things around it, breaking things, completely stripped the sheets of my bed and pushed the mattress off it and ripping up uni notes. I don’t even know why I did it. I just knew I had to do something and that was what I did. It was also the first time I cut myself. I just felt I needed to feel something, anything and that helped.

It was @LittleIchiban that ended up helping me through that night. She sat there with me, just letting me cry (with my arm bleeding, superficial, but still) and finally I knew I couldn’t put my friends through what I had been putting them through. That night was when I finally decided to try and turn my life around.

It’s now been three years. Three very long years, but I can finally say I’m me. I’m happy. I’m “normal” (whatever normal is).

I still had my ups and downs and it wasn’t really until the last year that I started to make progress. But these things take time and I took mine and I’m better off for it.

And because I did, I know have an awesome Man Piece to enjoy, not only Valentine’s Day, but every day with. #OMGCHEESE *vomits* 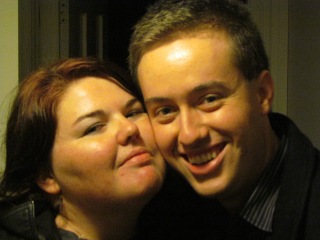 One thought on “VD and not the disease or the TV programme.”

I never know what to write as a caption, tbqh. I feel there’s more pressure to come up with something profound cause it’s on the grid. Whereas stories are a snapshot in time and I just say what comes to mind about my mundane life. I wanted it to be positive - look at my great hair, loving my new colour! But fuck, it’s so hard to be positive right now when I’m struggling. All I can see are the dark circles under my eyes and my double chin. I’ve adjusted to my new schedule of working from home, at the cost of my fitness and a bit of extra weight (whatever, it’ll sort itself out). Most of the time I just feel blergh which isn’t the best motivation for getting out when you don’t have a reason to leave the house. Anyway... where was I going with this? I have no idea. I feel stuck in limbo which is a bit shit.
Excuse me, but you’re getting in the way of Face ID. Since lockdown this cat has become very cuddly. Nimbus has usually been independent - she’d come and go as she pleased and would usually sleep in the spare room or office. But now, she’s a couch cat and will come and give me cuddles every night, eventually curling up on the blanket at my feet. Not really sure what prompted the change, but I’m here for it.
Achievement unlocked! First time making hot cross buns and I actually nailed it. They are so good. Used the @lewisroadcreamery recipe and added cranberries and white chocolate. Quite chuffed with myself as my track record with yeast is pretty hit and miss. • Also how good is this t-shirt for lockdown.
Day whatever... • Had to do formal dress up for team meeting today. So I put on a dress, ma pearls, and did my hair and make-up. Kind of felt better for it, even though I got back into leggings and a hoody soon after. Dress and sneakers are @torrid. • I don’t know what this pose is, but it looks cool?! It’s nice, it’s different, it’s unusual. • Had a bit of an emotional wobble last night. Now I just want all the comfort food and to do nothing. Doing nothing can be achieved, cause we can’t go out, but comfort food... I’m gonna have to improvise. How is everyone else fairing in lockdown?
I wished I wasn’t fat today. • I haven’t thought that in a long time. I’ve come to accept me for me over the years. And I try not to let it stop me from doing something I want to do. But today... today I tried something new and I didn’t enjoy it because I felt too fat to physically be able to do it. ⏺ ‘Why can’t my body do these movements and positions?’ ↪️ Because I have a gigantic stomach in the way. ↪️ Because it’s the first time doing this. I didn’t want to continue, but I did. I pushed through. I finished. • Today I did my first body balance session. (Les Mills has put up a few on TVNZ On Demand.) I adjusted many positions to suit me to the point I wasn’t really doing them. I paused often because I was out of breath or my muscles ached from holding poses too long. It was frustrating. Which is why I wished I wasn’t fat today. • We all have good days and bad days with our bodies. Today I just happened to have a bad one. It may not be for me, but I moved, I tried, and I’m knackered.
Day... I’ve lost track already. The rain stopped and the sun came out briefly. It almost felt like the entire neighbourhood got out for a walk at the same time. There were so many people out waking, with their kids and dogs. Several people out for a ride, like us. The best bit about it was there were barely any cars. It meant we could ride down the middle of the road, or next to each other. People were even walking and running in the middle of the road to keep distance. It felt amazing and it was peaceful and calm. • We did a loop to Northland, down through Karori tunnel, past the Botanical gardens and back up our hill to home. Total 30 mins, 9.5km. The bit of road from Karori to the gardens is usually gridlocked, so we don’t go that way normally. And it was so much fun to have reign of the road.
Day 3 of iso, day 1 of nationwide lockdown. Brain’s being a dick, but at least I have this crazy meow.
Day 1: Isolation started today for me. Have got my desk set up and Firebolt has already approved. Little shit also stole my seat three times today, so that was fun. I’ll be trying to post upbeat posts on my stories for the next month. Funny stuff/cat photos etc. Follow along! We’re all in this together.
A year ago, I was so excited to see giant pandas at DC zoo. Today I went to the dentist and got my first ever filling. Life is all about those swings and roundabouts. That’s my post, that’s all I got today. But swipe for panda! 🐼