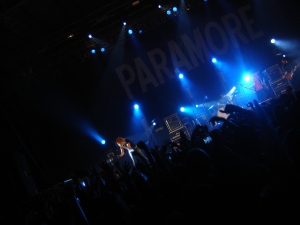 In what happened to be one of the best months I have had in a long time. March was filled with numerous international acts. Unfortunately I was unable to get to all of them, with my restricted income. Namely that of The Pixies. Now of which I find out the gig they announced in Christchurch is the same day as 30 Seconds To Mars. And as I cannot be in two places at once (lets admit, that would be pretty fucking cool) I once again miss them. Because there ain’t no way this bitch is missing Jared Leto and his tight tight jeans.

Anyway, the month of March contained a whirl-wind trip to Auckland for Paramore. Then the following weekend of insane madness for Backstreet Boys, Cobra Starship and Lady Gaga.

Paramore: It was totally awesome to finally see these guys live. We’ve only been waiting, oh, four years or so. Their albums do not do them justice. They are a band. Bands need to play live. ‘Nuf said. They sold out the first Auckland venue on the first day of ticket sales. It was then announced they were to move to a second venue and another allocation of tickets were to be sold. These also sold out promptly. Of course there was also the Christchurch gig the next night, which I hear was just as awesome. They played the usual hit singles – Misery Business, Brick By Boring Brick, Crushcrushcrush… ya get the picture. Also was a throw back to their first album, All We Know Is Falling. The Jury and the Saints opened for them. Another stand up Kiwi band. I personally love their catch phrase: “When you find someone else who hates The Beatles, U2 and Coldplay just as much as you. Start a band with that person.” – That’s my type of band. So first gig of the madness run was successful. 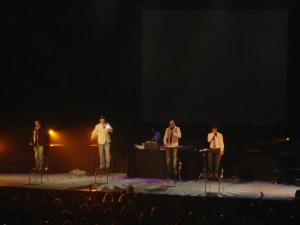 Backstreet Boys: Oh swoon. If you thought these guys were awesome back in the ’90s, nothing has changed. They managed the same level of singing and dancing at this concert, that I expect they were doing 10 years ago. Afterwards, my voice was worse for wear from all the childlike girlish screaming and my eardrums were bleeding from everybody else’s childlike girlish screaming. They played the favourites – Everybody, Backstreet’s Back, Larger Than Life… But they also played the new from their latest album This Is Us (most of which I didn’t know, because I haven’t listened to their new album. Shocking, I know.) Overall, a good night of girlish fun spent with my sisters-from-other-misters (you know who you are!) 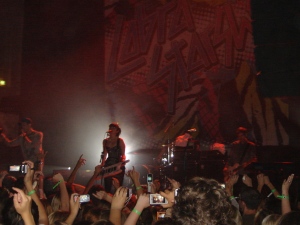 Cobra Starship ft. Owl City: What a combo. Owl City opened. They were pretty fucking awesome. With their mini string section and shiz. Total respect there. But the fun really started when Cobra took the stage. This was the second time I’d seen them play (the first was with Panic! back in 2008) and I think they got better. Their third album isn’t the best – it has it’s moments, but their stage presence has most definitely improved. And being in the Auckland Town Hall was amazing. It was such a weird place to have a gig like Cobra, but that is what made it awesome. The only downside was the floor. I would suspect it is a dance floor, which has the extra bounce put underneath to give dancers help with their jumps. Unfortunately when you fill the floor with a mosh pit of people, you get an experience like being double jumped on a tramp. Uncomfortable. Fun, yes, but uncomfortable. 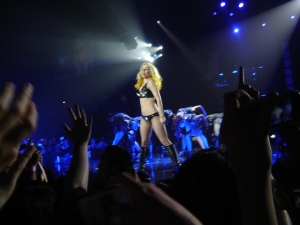 Lady Gaga: OHEMGEE. Semi Precious Weapons opened for Mz Gaga. Rather fitting as they are just as provocative as she is. The most amazing part of the entire concert were the costume changes. I think it was 16 in total. Her singing was amazing, the full stage setting was amazing and the fact I got almost within touching distance of her, made it magical. Her stage show and presence were nothing like I have ever seen before. If you ever get a chance to see her, it is a must. It will change your life forever. EVER.

And that wrapped up the end of the massive weekend/month of gig madness I have ever been to. Needless to say I was exhausted. I could barely move without aching. I was sleep deprived and my voice was fairly non-existent. But as I like to think, if you still have your voice the next day, you didn’t scream loud enough.

She’s got her inner fierceness down. 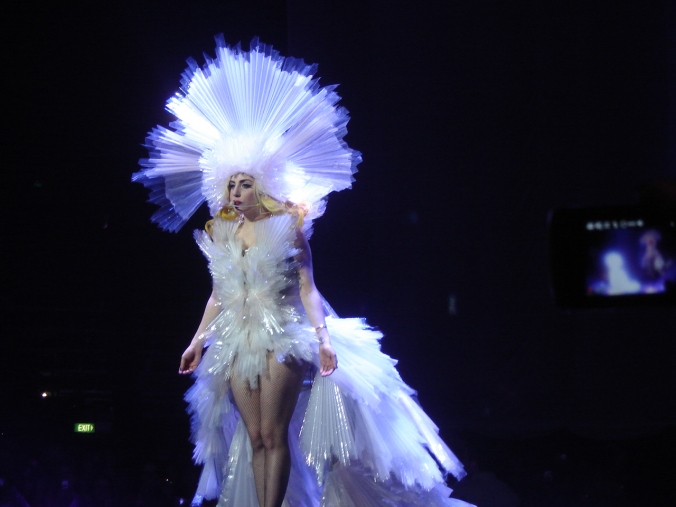 That feeling when you’re finally able to pull yourself up off the floor after a yoga sesh for lower back relief 🤣 • If I leave it too long between yoga my lower back starts to scream at me. Add in being super busy at work and my left hip today was all ‘ummm... that’s a no from me’. So it was on to the mat to sort it out, but because I had left it so long I struggled to get back up again. It was a tad awkward and probably hilarious to watch. It probably took me twice as long to get up than it did to do the yoga video. • I’m already starting to feel better and more relaxed. So hopefully tomorrow my hip will be more agreeable.
In the last day of 2019, I thought I’d share my top 9. Although these show some achievements, it doesn’t show all or necessarily my highlights. So I’ve added a few of my own ➡️ 1️⃣ I climbed Telegraph Hill to Coit tower in San Francisco. I didn’t think it was going to be that bad but once I started, it felt like the stairs just didn’t stop. But I persevered and got to the top. 2️⃣ I walked across the Golden Gate Bridge. I’ve wanted to do this for years, so to finally cross it off my bucket list is an achievement. 3️⃣ I got back on a bike and eventually bought my own. This is massive because back in 2016, I came off a bike and ruined my knee, vowing never to get back on one again. 4️⃣ Still with the bike theme - I rode up Mt Vic. Something I thought I would struggle with, but now I’ve done it twice. 5️⃣ I saw pandas at the Smithsonian Zoo in DC. 6️⃣ I saw Harry Potter and the Cursed Child in Melbourne. 7️⃣ I saw Hamilton on Broadway. 8️⃣ I climbed Mt Eden on a trip to Auckland. It was easier than Telegraph Hill. 9️⃣ I started taking and posting outfit photos again and not giving a shit. I hope you all have a happy New Year and here’s to whatever 2020 brings.
Another day, another 39km bike ride with bae. I’m knackered. • There were a few incidents during our ride today, which tarnished the mammoth effort. I came very close to not riding home at all after a car did a u-turn in a T junction and didn’t see me - a classic “sorry mate, I didn’t see you”. I almost rode right into the driver’s side door. Thankfully I managed to pull off an emergency stop and avoided hitting him. But it could have ended very differently for me. I really urge all drivers to look twice and respect other road users - we all have the right to use the road. • Anyway. Harry Potter leggings and tee from @torrid. I’m nothing if not predictable in my clothing choices 😬
25km ride today! I’m knackered. Beautiful day for it and look at those pōhutukawas. A few days rest and a bit of pushing through, as well as several stops to catch my breath got me there. But tomorrow might have to be a rest day again. What have you done for Boxing Day?
Meri Kirihimete from our family to yours. 🎄🎅🏻🤶🏻😺😺 • • • • #merrychristmas #kiwichristmas #herdingcats #familyportrait #furbaby #herdingcatsishard
Every flower must grow through dirt. I’ve been struggling with low energy and random pain lately. Nuromol has become my friend. Not sure if it’s something else or just end of year exhaustion. But yesterday I went for a short walk and today I washed the house. Both felt like incredibly hard work and then I napped. Hoping two weeks off is going to help things.
Cheeky mirror selfie. This week is tough. I’m physically showing up, but I’ve mentally checked out. I’m strugs to func at the most basic level right now and am in desperate need of a week of sleep. Hurry up Friday.
I was so hangry in this moment. We didn’t have time to grab coffee or food before heading to our tour of the Capitol. There was a delay on the metro, so we had to swap lines, then all advice said to get there 45mins to an hour before your scheduled time because of security. We breezed through security then had to wait for our tour to start. The Maccas breakfast afterwards was amazing. The moral of the story is that travelling isn’t always perfect. It’s meant to push you out of your comfort zone. I’m so ready to get out of my comfort zone again.
Sunday snugz.