Maple Pecan cheesecake – it was totally nom. Just made it for family dinner on Saturday night and I figured if I don’t have a job I might as well bake and blog, blog and bake.

This is pretty basic for a chilled cheesecake, but there are several areas in which it can go really wrong. The following ingredients and instructions are what appears in The Australian Woman’s Weekly Cupcakes, Cheesecakes, Cookies book but they are not 100 per cent what I followed.

4. Beat cheese and sugar in medium bowl with electric mixer until smooth; beat in cream and maple syrup. Stir in gelatine mixture.

With the type of tin used – I usually just use a round spring-form 25cm tin. It is much easier to get the cheesecake out of the tin and if you place the bottom into the ring upside down, you can easily slide the entire cheesecake off onto a plate. In switching the type of tin used, I increased the amount of biscuit used for the base to 250g and butter to 80g.

The base – I usually don’t use the base recipe which is provided, but I decided to give this one a go, because it was different with using the ginger nuts. But I think I have found the perfect one – 250g wine biscuits blended with 2 tablespoons of apple sauce and 2 tablespoons of margarine or butter. This base combines really well and doesn’t crumble when it is cut.

Gelatine – if done wrong there can be large chunks throughout the cake which are chewy and gross and ultimately ruins the cheesecake. If you have a small jug or bowl which you are able to sit in the top of your jug then an easy way to heat the gelatine is to place the gelatine and water in the small bowl then place in the top of the jug and boil. Once the jug is boiled give the gelatine a stir and allow to cool. By preparing the gelatine this way it combines completely. When adding it to the cheesecake mixture, it needs to be mixed in quickly and thoroughly. Thus leaving the cheesecake with no unwanted chewy lumps of gelatine.

Maple syrup – I used Queen maple flavoured sugar free syrup, which can be bought from New World supermarkets. Some may say this is the cheats version of maple syrup, but it allows the sugar content to be reduced in the cheesecake and probably the richness too. 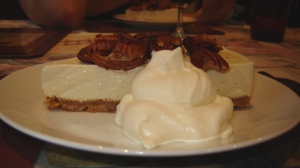 When I am in Hawke’s Bay, I tend to test my skills with new types of cheesecake. Usually so I can test them on my father and my soon-to-be brother-in-law who both like delectable things.

This one I have been wanting to make for a while, but it always came in as second choice against others. So finally I decided it was time to make the Butterscotch Pecan Cheesecake.

Cheesecakes have a rep for being rather difficult, but if you know what you’re doing they can actually be quite easy. They probably get the stigma because of how difficult they look – anything that looks that good, must be hard.

But once you know what you’re doing and have done it a few times, cheesecakes become a breeze to whip up.

3. Make filling by beating cheese, extract and sugar in medium bowl with electric mixer until smooth; beat in eggs. Stir in flour and nuts.

Instead of using chocolate biscuits I just used a packet of wine biscuits, which is what I normally use for a cheesecake base. By using an entire packet you will need to also up the amount of butter used. I used 100g of melted butter. I tend to add more butter than the recipe usually says anyway because I like a base that does not crumble and actually sticks together. I usually use a base which is 1 packet of wine biscuits, 40g of low fat spread, and 2 tablespoons of apple puree. This makes an amazing base, but alas, I did not have apple puree on hand, so had to do it the old fashioned way.

Also, with the spring form tin, if you place the base upside down in the tin it allows for easier removal of the cheesecake.

With adding the pecans I just used a 70g packet, which is the average size of a packet of nuts here in NZ. I didn’t chop them up too finely, because if you’re adding something like nuts to a cheesecake they should be chunks that you can see and eat, not ground up into the mix.

When cooking the cheesecake, I baked it at 140°C with fan-forced. In doing so you don’t have to bake it for as long as a conventional oven. I left it in there for 35 minutes and then turned the oven off and left it in there to cool. By doing this you cook it till just set and by leaving it in the oven it finishes cooking the cheesecake. It makes a more creamier cheesecake than if you were to remove it from the oven straight away.

This cheesecake is best served with a bit of whipped cream on the side. It makes it just that bit more devilish.