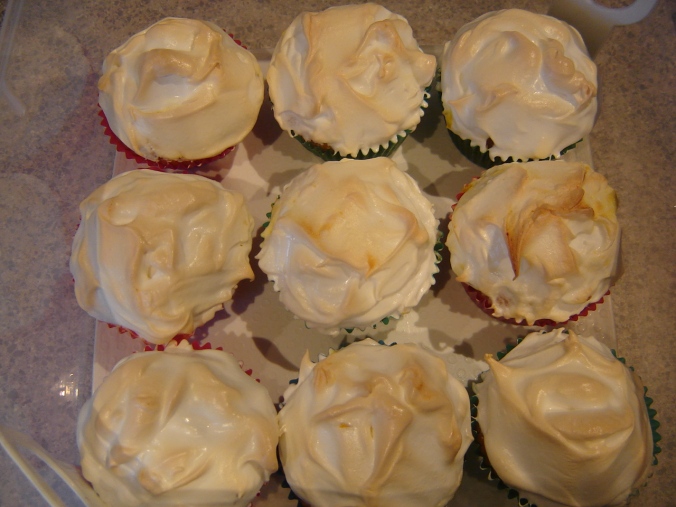 This has been sitting in my drafts for a while and obviously I’m going on a finishing spree of posts lately. Don’t be deceived by the cloud like appearance. These cupcakes are evil, pure evil because of the amount of sugar they have in them. They do taste amazing though. I devoured four by the end of the day.

1. Make lemon curd. Combine ingredients in a small heatproof bowl over small saucepan of simmering water, stirring constantly, until mixture thickens slightly and coats the back of a spoon. Remove from heat. Cover tightly, refrigerate curd until cold.

3. Beat butter, rind, sugar and eggs in small bowl with electric mixer until light and fluffy.

6. Cut a 2cm deep hole in the centre of each cake, fill with curd; discard cake tops [WHY!?]

8. Pip meringue on top of each cake; place cakes on oven tray.

9. Bake in hot oven 5 minutes or until meringue is browned lightly.

The recipe calls for coconut in the cake and in the meringue, but I made it without. Partly because there was none in the cupboard when I decided to make them and partly because coconut is such a weird ingredient.

With meringue you literally need to beat the shit out of it, and then some more. This is usually where people go wrong – they don’t beat the egg whites enough. Just so happens, this was the first time I have EVER tried to make meringue and I think I did a pretty damn good job. Except for the fact that after a day you could see the sugar coming out in the meringue – a tell-tale sign I did not beat the egg whites enough. My mother said you can test if it is done by rubbing some meringue between your fingers (DIRTY) to feel if the sugar is dissolved. If you can still feel crystals, beat that shit some more. This she tells me after I’ve already baked them and eaten two. Oh well.

With piping the meringue onto the cupcakes you don’t necessarily have to pipe it. I don’t have a piping bag so instead used a knife to spread it on. Bit more messy, but it gets the job done.

Don’t just throw away the left overs. Why would you? It’s good eating. You can perhaps make a cake of sorts. Grab a baking dish, layer the cut out bits of cupcake on the bottom, spread with left-over lemon curd and then spread left-over meringue over that and bake until golden. Of course, you could just eat the left-overs without doing this, like I did. Nom nom nom. But be warned: I felt sick for hours and no amount of Coke Zero made me feel better. And trust me. YOU WILL HAVE LEFT-OVERS.

2 thoughts on “Evil in cupcake form.”